St. Patrick's Church was founded in 1870 and is located in historic Tipperary Hill on the west side of Syracuse. The church was dedicated on September 15, 1872 by Bishop Francis McNerny of the Albany Diocese.

Many of the first parishioners arrived in 1825 from all the various counties in Ireland to work on the Erie Canal and settled in Tipperary Hill. The first mass was celebrated on July 31st, 1870 by Rev. Hugh Shields, the first pastor, in Cool's Hall, located at 101 Hamilton Street, on the banks of the Erie Canal.

During the summer of 2012, St. Patrick's and St. Brigid's were canonically linked, which means that they are still separate parishes, but share a pastor. Both parishes have their own history and roots.

St. Patrick's Church will be celebrating our 150th anniversary in 2020! More info to come in the years ahead to mark the event!

May 1926 Bishop Daniel Curley established the new parish of St. Brigid's to lesson the burden of St. Patrick's parish.  Property located at Willis Avenue and Herkimer Street was purchased from James Haydoe.  It was large enough to accomodate future plans for a Church, School and Rectory. There were two homes and a carriage house on the  property.  Eventually, these were torn down or moved.

June 25, 1926 Rev. William McCormich was appointed first pastor.  He arranged with St.  Patrick's to use the third floor of their school for St. Brigid's services until the new St. Brigid's facility became available.

On July 25, 1926 excavation began for a combination St. Brigid's church and  school.  On August 21, 1926 Mass was offered in the school building for the first time.   School opened September 6, 1927 with four Sisters of St. Joseph

St. Brigid's second pastor, Rev. William Brennan set  in motion a program to build a permanent Church.  On September 18, 1955  Bishop Walter Foery blessed the ground on which the new church would be built.

Rev James Bannon, St. Brigid's third pastor.  He along with 200 men and other faithful parishioners whose hard work and generosity made it possible, came to the dedication of St. Brigid's Church on November 14, 1956.  The three altars in the new church were consecrated to God's service and Mass was celebrated.

Father Norcott was succeeded by Rev. James McCloskey as pastor from July 1980 to 1995.  One major change during this time was the renovation of the church basement and the building of the present Father Norcott Room with a spacious meeting/dining area and kitchen.

In July 1995 Rev. Laurence Kennedy became pastor.  Father Kennedy inspired all parishioners as he struggled through cancer with dignity and courage. Upon his retirement St. Brigid & St. Joseph Church became linked with St. Patrick's Church with Rev. John Fenlon as pastor of the two churches until his retirement in August 2013.   The need to reduce and combine Masses became necessary.

Rev. Kevin Maloney became pastor of the linked churches in October 2013, at a time when the Diocese was struggling with the shortage of priests and the decrease in  registered church members. Father Maloney's positive spirit and the love both parishes had for him helped parishioners as the Diocese began to plan and organize what the future of the churches and St. Brigid's might be, including the possibility of closing St. Brigid & St. Joseph Church as we have known it for the past sixty years.

Our Parish family includes 10 men becoming priests and 1 Brother.  Also, 25 St. Joseph’s nuns, 6 Franciscan nuns and 4 Daughters of Charity. Through the years we have had many Societies including Mother’s Club, Altar & Rosary Society, Legion of Mary, Holy Name Nocturnal Society, Choir, Ushers Club and Our Lady of Mt. Carmel. 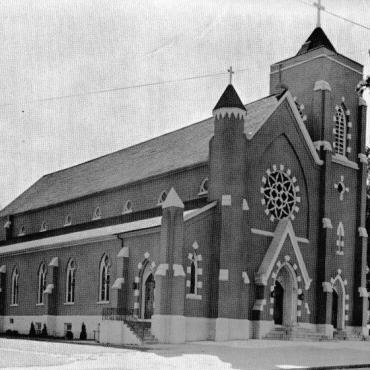 Your Generosity Makes a Difference!